Included below are homes for sale in Downtown Tampa. If you would like more information on any of these Downtown Tampa real estate listings, just click the "Request More Information" button when viewing the details of that property. We can provide you with disclosures, past sales history, dates and prices of homes recently sold nearby, and more.

And, if you haven't already, be sure to register for a free account so that you can receive email alerts whenever new Downtown Tampa listings come on the market. 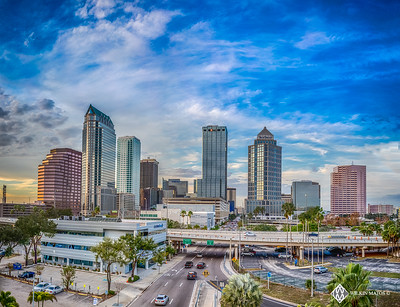 While the entire Tampa area in the Tampa Bay area stretches through several counties, downtown Tampa is a smaller area bordering Garrison Channel to the south, Hillsborough River to the west, Ybor Channel to the east, and Interstate 275 to the north.

The downtown Tampa skyline has been growing with high-rise office buildings and beautiful luxury condominiums such as Skypoint. You'll find several great restaurants, shops, museums, galleries, and bars, however, most of Tampa's nightlife is found in other areas like Hyde Park and Ybor City. But downtown Tampa has the Tampa Convention Center, St. Pete Times Forum, and the University of Tampa located right across the waters of Curtis Hixson Park. Many popular festivals and events are held in this park. The TECO Line Streetcar provides affordable transportation to other areas including downtown.

The Tampa Riverwalk is located on the western side of downtown along the Hillsborough River. This is home to the Curtis Hixon Park, private water taxis, boat rides, cruises, water bike, paddleboards, and kayak rentals. This 2.6-mile waterfront walking and biking path is one of Tampa's signature developments and connects some of the downtown's major attractions while offering beautiful views of the city.

Whether it's enjoying a pink, sunrise sky first thing in the morning or an evening stroll, the Tampa Riverwalk is perfect for a variety of small vehicles such as bikes and segues, joggers, walkers and runners. Plus, the South Plaza, which marks the beginning of the mile marker system is home to the River wall, a collage of more than 500 photographs by artist Bruce Marsh.

Also along the Riverwalk is the Florida Aquarium, one of Tampa's most popular attractions. The wave-shaped building perfectly fits along the waterfront with a lush and tropical environment, coral reef exhibit, endangered green sea turtles, and a "swim with the fishes" program.

Channelside Bay Plaza is home to the cruise ship terminal and the Tampa Bay History Center, local heritage and history Museum. Grab a sandwich at the Columbia Café, a branch of the Columbia Restaurant, Florida's oldest restaurant. Following the river, you'll find the Sail Pavilion where you can stop in for a relaxing drink or snack.

At mile marker 1.3 is the Curtis Hixon Waterfront Park. It offers a dog park, kayakers and paddleboards as well as a private water taxi along the river. The Glazer Children's Museum and Tampa Museum of Art is also located along the Riverwalk. The building alone is an architectural masterpiece but the children's Museum is perfect for kids that can drive a fire truck through Tampa Bay streets, help in a veterinarian's clinic, or be their own meteorologist.

On the north end of the Riverwalk is perfect for dining. With fantastic restaurants, legendary landmarks, and the historic Tampa Heights Water Works building, constructed in 1903, you can find exactly what you're looking for in "Old Florida" design and ambiance. 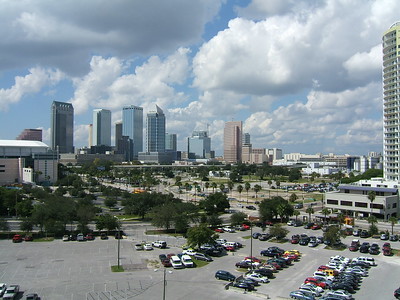 Downtown Tampa is the central business district of the city and the chief financial district of the Tampa Bay area. It is second only to Westshore regarding employment throughout the area. There are several major headquarters and companies present in downtown Tampa including Bank of America, BB&T, Marshall and Ilsley, PNC Financial Services, SunTrust, Sykes Enterprises, TECO Energy, and Frontier Communications.

It's also home to the Tampa Convention Center, a midsize center located in downtown at the mouth of the Hillsborough River. It opened in 1990 and encompasses 600,000 ft.² in total with a 200,000 square-foot exhibition hall, ballroom, and 36 meeting rooms. It's home to over 300 festivals and events each year.

There are five main districts to the downtown Tampa area: Uptown, Channel, University area, Encore, and Riverwalk. We've already talked about the Riverwalk area and it's fantastic to point for mile-long walking and biking trail along the edge of downtown. The Uptown area, also known as the River Arts District, a Northwestern section of downtown that contains the majority of nightlife and dining.

The Channel District is also technically downtown adjacent to the main CBD. It's known for many prominent downtown venues, the convention center, the Tampa Bay History Center, the Florida Aquarium, and the SS American Victory. There are twin 30 story condominium complexes built in 2007 called the Towers of Channelside and several other residential mid and high-rise units.

The University Area is home to the University of Tampa, a coed University making up the city's western boundary and located just across the Hillsborough River from downtown. It's home to about 6900 students.

The Encore district is the northern half of downtown with large construction projects, retail, residential condominiums, grocery stores and markets. It is known in what used to be called the Historic Ybor district.

Downtown Tampa Florida is primarily condominium buildings. There are new construction condos, historical landmarks, and luxury buildings. While there are also several condo buildings and outlying areas that border downtown, there are just a few condominiums in the actual downtown area.

The Tampa Edition – this currently under construction downtown Tampa condominium is a one-of-a-kind building featuring 37 luxury units as well is a five-star hotel with the ultimate in resort-style living. It offers many amenities, three-car garages, and a variety of condominium units starting at about $2 million.

Skypoint – built in 2007, this downtown condominium complex features two-bedroom units as well as a penthouse level condominium starting at $600,000. It offers 270° panoramic views of the downtown Tampa skyline.

One Laurel Place – built in 1982, this desirable landmark has been completely remodeled and it's close to the Tampa Riverwalk. It offers 24-hour security, and many on-site amenities as well as within walking distance to the Straz Center, fantastic shops, restaurants, and entertainment.

SkyHouse Channelside - built in 1982, this downtown Tampa landmark is located at the northern end of Riverwalk and features affordable condominiums starting at about $200,000.

Grand Central at Kennedy – Built in 2007, this condominium complex is located on the Channelside of downtown featuring 14 floors and several dozen units. It offers several amenities and allows pets.

For those with school-age children, students attend the Hillsborough County Public school system and are assigned to the Just elementary school, the Madison middle school, and the Blake high school. The closest school is about a mile away from downtown.

If you're looking for a luxury, low-maintenance lifestyle, the condominium ambiance, and close to everything, choosing a home or condominium in downtown Tampa is a great option. There are lots of opportunities for residential properties and for the utmost in representation, contact Buyers Broker of Florida. We only help buyers and would love to help you find the perfect home in downtown Tampa or anywhere throughout the Tampa Bay area.