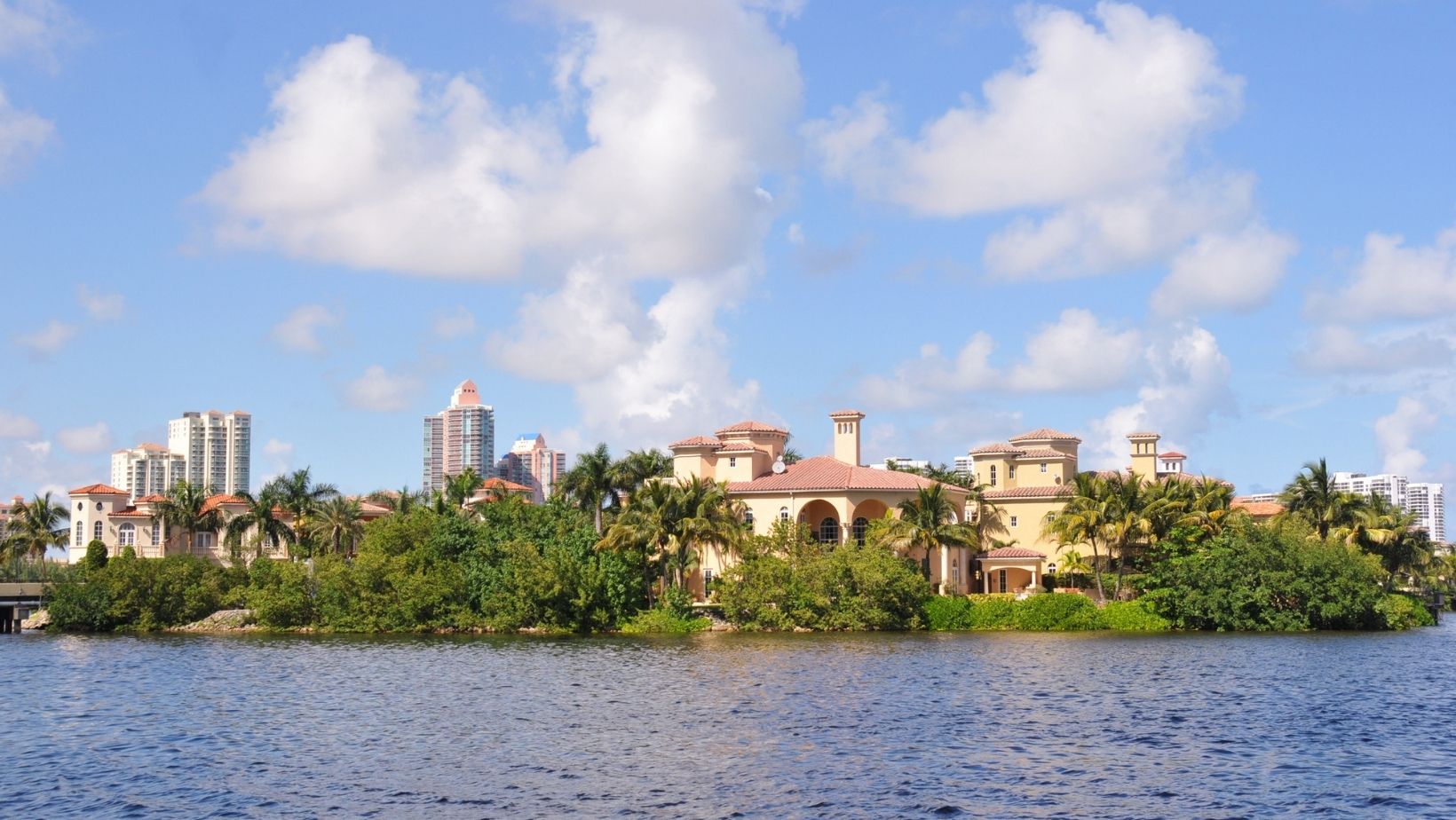 * Read on below the listings for more on waterfront homes in the Tampa area.

Tampa, a major city and the county seat of Hillsborough County Florida is on the West Coast of the state along Tampa Bay in the Gulf of Mexico. It's the largest city in the Tampa Bay area, home to about 400,000 residents. It's also the third-largest in the state after Miami and Jacksonville. Tampa and Tampa Bay are not exactly the same thing. Bayshore Boulevard runs along Tampa Bay, the large natural harbor and shall estuary connecting the Gulf of Mexico on the west-central coast of the state. Tampa and the surrounding communities are known as the "Tampa Bay Area" and the city of Tampa is part of the Tampa, St. Petersburg, Clearwater Florida Metro area.

Included below are waterfront homes for sale in the Tampa Bay area updated daily from the Central Florida MLS. If you would like more information on any of these waterfront homes for sale, just click the "Request More Information" button when viewing the details of that property. We can provide you with disclosures, past sales history, dates and prices of homes recently sold nearby, and more.

And, if you haven't already, be sure to register for a free account so that you can receive email alerts whenever new Waterfront homes for sale come on the market.

More on Waterfront Homes in the Tampa Bay Area

Well-known for its beautiful Gold Coast beaches, Tampa Bay features three major sports teams, sunny weather, and world-class theme parks as well as beautiful waterfront homes and estates. The shores of Tampa Bay features rich waters and deep history. The community surrounding the bay exploded in the 20th century and today, the entire area is home to about 4 million residents making it a heavily used commercial and recreational waterway.

After being seriously polluted in the 1980s because of all of the recreational and commercial activity, greater care has been taken to mitigate the effects of human habitation on the bay itself. With an upgraded sewage treatment facility and seagrass restoration projects, the health of Tampa Bay has improved over the last 40 years.

Many people in the Tampa area sometimes referred to the city and surrounding cities is simply Tampa Bay, which comprises many towns and cities in a couple of counties. Many commercial, tourists, and even locals consider Tampa Bay as the primary name even though the city itself is simply Tampa.

Along the shores of Tampa Bay are several ports, port Tampa Bay, the oldest port on the water dates back to the 1820s. Port Tampa was established in 1885 and is an important arrival point for aviation fuel piped in from nearby Tampa International Airport and MacDill Air Force Base. Port Manatee is located on the southern shore of Lower Tampa Bay and features the most refrigerated dock space of any Gulf of Mexico port ranked fifth among Florida's 14 seaports for cargo tonnage. And the port of St. Petersburg, located on the St. Petersburg waterfront on old Tampa Bay and operated by the city. This port caters to private vessels and is the side of the US Coast Guard station.

Because Tampa Bay stretches hundreds of miles of shoreline, finding a home along Tampa Bay or Old Tampa Bay is easy. There are several towns from Tampa to St. Petersburg, Sun City in the south all the way to the peak at Oldsmar and Palm Harbor. Tampa Bay features multiple waterfront homes, estates, and communities. Here are just a few of our favorites.

Down south in Ruskin Florida toward the base of Tampa Bay are multiple condominiums, townhouses, estates, and waterfront rentals. Many of these homes start at less than a $300,000 at the opening of cabbage Creek and crab Creek along the tropical island and the Sandpoint preserve.

Symphony Isles is located a little farther north in Apollo Beach and offers single-family homes, estates, and even lots and parcels of land for custom building. Bal Harbour is also located here as well as and Andalucia, a small peninsula with multiple homes starting at about $600,000.

From here there's quite a stretch of nonresidential homes following up S. Tamiami Trl. or Highway 41. This route follows up into downtown Tampa surrounding Hillsboro Bay. Just south of downtown is Davis Islands. This primarily residential community has luxury homes and waterfront estates starting at about $1 million.

Following Bayshore Boulevard on around down the west side of Hillsborough Bay, you'll find multiple residential pockets and beautiful waterfront homes starting about $600,000 up to $10 million based on size and condition. You'll also find multiple condominiums and complexes along this route with a variety of amenities and luxury perks.

On the west side of the peninsula bordering Tampa Bay is the Westshore Yacht Club. These luxury homes and waterfront estates start at about $1 million with a variety of luxury upgrades and amenities.

For the ultimate in waterfront living check out Sunset Park Isles, a luxury community located along Westshore Boulevard. These homes start at about $2 million with large lots of up to 1 acre, multiple lot options, and unobstructed views of Old Tampa Bay and Feather Sound. There are also a few other beachfront communities such as Beach Park Isles and Stoney Point just north along Culbreth Bayou.

From here, travel north along Interstate 275 to the Courtney Campbell Causeway. Out on Rocky Point jutting out into Old Tampa Bay are several condominium and townhouse communities such as the Sailport Resort. Just north is Dana Shores, a community that prides itself on every home being waterfront property. All of these homes are on a canal with easy access to the bay and the ocean.

Following Highway 580 up and over the bay you'll come to Oldsmar with a few waterfront homes along with parks and trails. This is its own city and many of the homes were built within the last 50 to 60 years.

On the west side of Tampa Bay you'll find larger lots, estates, and mansions featuring homes upwards of $9 million. Many of these homes come with docs, boat access, boat launches, and other waterfront outbuildings and accessible options.

Safety Harbor is located just south of Philippe Point and offers old Florida charm with Victorian homes, waterfront estates, and shoreline communities. A few condo complexes are scattered along the shoreline as well making this an affordable option for Tampa waterfront homes.

The Bay Aristocrat Village is an affordable condominium complex located on the shores of Tampa Bay in Clearwater. These homes start at about $170,000 for one and two-bedroom condominiums built around 1980. They also have fairly affordable homeowner association dues that cover common area maintenance and amenities such as a resort-style swimming pool, tennis courts, and social calendar.

Following the shoreline, south are other condominium complexes such as the Village I at Cove Cay and a few townhouse complexes with condos starting at about $105,000.

Most of the shoreline on the western edge of Tampa Bay is nature preserves and marshland. Most residential homes are set back from the bay until you get to St. Petersburg. Along Bayou Grande Boulevard are several luxury estates starting at about $1 million. These homes have beautiful views of the bay and the nature preserve on Googe Island.

Venetian Islands is located in St. Petersburg jutting out into Tampa Bay featuring luxury waterfront homes for every lots. These start at about $1.2 million and are primarily residential. Snell Isle features a golf club, the St. Petersburg Yacht Club, and a small harbor surrounded by luxury homes and waterfront estates.

Tropical Shores and Coquina Key are found just south of Venetian Islands with homes priced from about $400,000, condominiums price from $150,000, and the residential communities of Greater Pinellas Point and Bahama Shores. These communities feature shops, restaurants, recreational centers, and several shoreline parks. Waterfront homes are along Pinellas Point Dr., South and fourth Street with a few public access beaches and nature preserves.

From this point, we've reached Interstate 275, stretching from St. Petersburg to Bradenton. This provides easy access to both the Gulf of Mexico, the Boca Ciega Bay Aquatic Preserve, and several luxury homes and waterfront properties along Bay Way, Isles and Pinellas Bay way

So as you can see, there are literally hundreds if not thousands of Tampa Bay waterfront homes and properties to choose from. From here, it's really a matter of where you want to live, which city you want to be included in, and if school zones are a factor. Price, location, and views all differ depending on where you choose to live. We would love to help you find the perfect Tampa Bay waterfront home and because there are so many different locations, it can get a little overwhelming.

Let us help you find the perfect home in the right neighborhood for the right price. Contact us at any time. We are exclusive Buyers Brokers throughout the Tampa Bay Metro area and would love to help you make Tampa Bay your home.